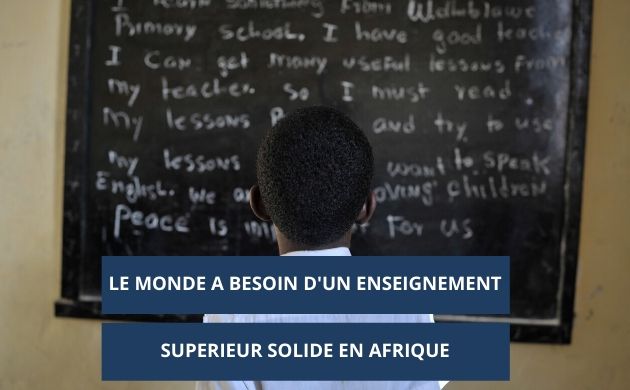 There is a positive side to Africa being the most youthful continent, says James Otieno Jowi, executive director of the African Network for Internationalization of Education. “This is very important for global higher education.

“First, it means that enrolments in higher education will grow tremendously. Africa is now the region with the fastest growing enrolment rates. There are reports of increases in numbers of universities in almost all African countries. It also means that Africa will be a major player in global mobility, with many young people seeking study opportunities in other countries.”

There is renewed interest in African higher education, Jowi adds, both within and outside the continent. “Non-traditional players like China, India and Brazil have entered the African higher education space with unprecedented vigour. China has opened 60 Confucius Institutes in Africa and has committed to offer 150,000 scholarships for developing countries.”

With African countries experiencing economic growth, its driver – the knowledge sector – is growing. Also expanding is the middle-class, which means that increasing numbers of Africans will be able to make choices regarding university.

“Going Global is an opportunity for global higher education to demonstrate responsibility in collaborations with Africa, so that such efforts spur developments rather than stifling Africa’s efforts.” There are “wonderful opportunities” for developing research partnerships especially.

Dr Peggy Oti-Boateng, senior programme specialist for science and technology at UNESCO’s regional office in Zimbabwe, says there is a lot going on in higher education in the area of educational technology through, for instance, the award-winning African Virtual University.

She also coordinates the African Network of Scientific and Technological Institutions, a regional non-governmental agency that facilitates collaboration among institutions to support science, engineering and technology. It has some 200 member institutions in 37 countries.

The most active members are in Anglophone African countries. It is important to understand the great differences between universities in Anglophone, Francophone and Lusophone countries, because of their colonial pasts – as well as differences within these groupings.

Africa, says Oti-Boateng, has varied cultures and rich natural resources that the world is interested in studying. There is also a wealth of indigenous knowledge, which brings about “quicker innovation, because you are starting from what you know today”.

The African islands, for instance, have exceptional knowledge of the oceans, which needs documenting by universities, and this is the case in many other fields such as agriculture and herbal medicines.

Perversely, what African higher education offers the world is its best brains. Universities in the West are brimming with African academics and while there are diaspora initiatives, Oti-Boateng believes more can be done to draw on talented Africans with feet in different worlds.

There need to be more partnerships between African and international universities so that higher education can draw on “diaspora people who understand our issues and aspirations, so that we can work together on common fronts”.

And what about the future?

Piyushi Kotecha, CEO of the Southern African Regional Universities Association or SARUA, believes harmonisation will continue to be the big goal and challenge for higher education, and it is needed “sooner rather than later” as universities strive for greater collaboration.

Regional university associations are ideally placed to advance harmonisation efforts, such as bringing quality assurance activities and agencies together, but this is not funded at the regional level. “The political will is not there as regards to the finances.” Other big areas of interest currently “on the move” are climate change and the needs around online and access.

Ahead of Going Global there will be a SARUA leadership dialogue on open access and African research publishing which, says Kotecha, will look at how open access publication policies could tackle problems of access to journals by African universities and ensure the effective dissemination of Southern African research to meet the needs of the region.

“African universities should really lobby publishers via an Africa-wide campaign to bring down the increasing costs of journals, and that will have an impact on their research.”

At Going Global, Jelel Ezzine says, it will be good to see people exchanging successful practices and trying to adapt them to their contexts. Gathering Africans to exchange ideas and practices is of “extreme importance”.

“I hope many Africans will be present and will share their views, concerns and visions with the rest of the world so that we can all work together for the benefit of everybody.”

James Otieno Jowi agrees that it is positive to have Going Global in Africa. Concerted efforts could eradicate the continent’s scars, and the conference will present opportunities to discuss major issues such as the extent to which Africa has gone global, whether it is still at the periphery of the knowledge society and barriers to its participation.

“African higher education leaders need to take their place at the table and discuss these issues. The future of Africa’s youth is at stake.”